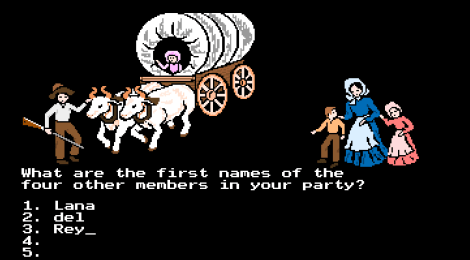 It was a normal Thursday. I was sitting on my couch after a long day of having one class and I decided to give Lana Del Rey’s newest album, Honeymoon, a listen. As I do when listening to any record for the first time, I launched an online version of the Oregon Trail game and pressed play.

My small town Ohio carpenter set out on his path in May of 1848 with his family. The eponymous first track turned my fun voyage into a dour journey. One of my oxen was injured. I, however, was torn between whether Lana was improving or wrecking my day. We continued west and I began zoning out, thinking about all of the fun times my wife and I had shared back when the world was black and white. 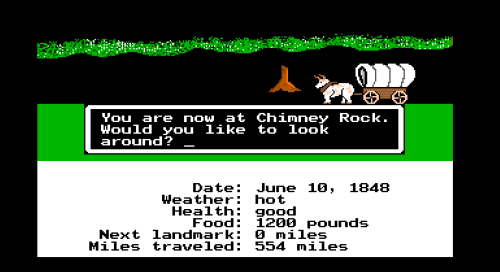 I was awakened from my trance by some sort of computer generated pan-flute in “Music To Watch Boys To,” and I decided not to stop at Chimney Rock. As Lana unfolded her tale of tragedy, my party experienced struggles of their own – a thief came in the night and stole two of my oxen. I had to pause the game. Two oxen??? How heavy of a sleeper am I? Do you know how hard it is to steal two barnyard animals???

“I suppose struggle is a part of the journey,” I told myself halfheartedly. Just then, my son contracted measles. Lana informed me that “Terrance Loves You,” but I didn’t want to talk about it. Then, as if to add insult to injury, a thief stole 22 bullets, a number that sounded both too few and too many.

I found myself focusing on the music once I had reached South Pass. “God Knows I Tried” just felt right with the nondescript black background on my screen. I listened to the song without continuing on my voyage. Once I returned to the game, I found out that I had been tremendously selfish in taking some personal time, as there was a rest button so that my party could also take some time. I pressed it.

Back on the road, I couldn’t help but ponder how we could possibly be low on water when we had just passed a river. I was not permitted to ponder for long, as disaster struck. 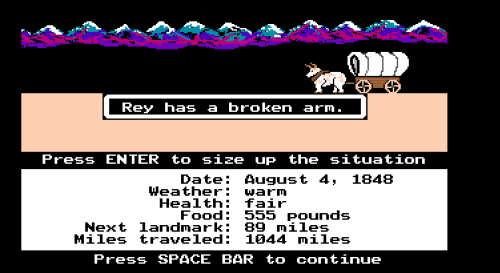 My third party member (and the last section of Lana Del Rey’s name) had a broken arm. Tough shit. We continue on. For some reason, this unfortunate series of events felt right – Honeymoon had prepared me for this. It was not until August 4, 1848 that I understood the album. It became clear that Lana Del Rey was singing about living in a sludgelike disappointment. I got it, too. Day in, day out, my party was not happy with the slow progress we had been making toward our manifest destiny. We upped our pace.

When “Religion” came on, I began to feel almost hopeful. I felt ready to rekindle a long-lost love with the wife I had swept to the side to raise our three beautiful children. I shot three deer and a bison that night, and I won’t go into detail about what happened later in the candlelit wagon while the children were out playing.

Though my personal life was flourishing, this adventure was not what I had imagined it to be. As we traveled through the morose prairie, “Salvatore” wasn’t making me feel like I was on a path to greatness, either. Gorgeous as it was, the references to “soft ice cream” merely reminded me that I had 13 pounds of food left. 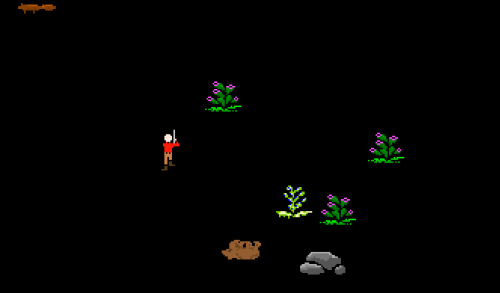 As I listened to “The Blackest Day,” I was working my ass off. I was hunting every day to try to keep my family alive and I came home tired every night. I knew my family was appreciative, but it never felt like I could do enough. If programmers had developed the game more to allow family members to talk, I can guarantee that my wife would only sigh at me when I returned each evening.

I lost hope in our love. I was starting to buy into Lana’s “sadness always” mentality, and my wife and I decided to split after “24.” She died of typhoid. It was for the best. 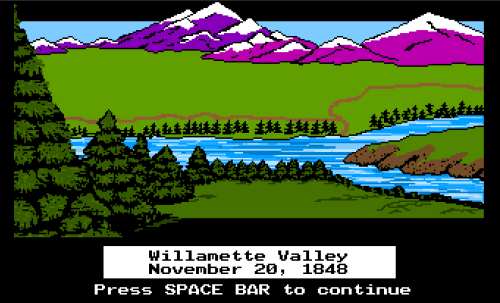 The remaining four of us floated down the Columbia River in silence. As we looked out from the side of the wagon, the sharp rocks that could end this journey so close to the finish were no longer scary. We all dodge obstacles standing in the way of lofty goals. Some might find meaning in progress, but we don’t grow through success. As I played through the game that had thwarted me so many times before, it became clear that Lana had thought it all out in Honeymoon: take pleasure in the pain.

← Mill – Dreams & Wishes (Prod. by Jengi Beats)
Anna of the North is Your Next Indie Pop Darling →