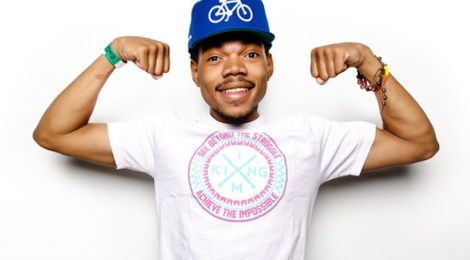 It’s Tuesday, the Bulls open the season tonight, and Chance the Rapper just released a stellar new song. What a day to be a Chicagoan.

Chano’s latest, “Angels,” features Chicago rap wunderkind Saba and the kind of bluesy, soulful instrumental we’ve come to expect from The Social Experiment. The introspective record debuted on The Late Show with Stephen Colbert, highlighted by a frenetic live performance and the unforgettable image of Colbert sitting placidly at his desk rocking a glowing halo.

“Angels” wasted no time, beginning  with a barrage of steel drums, rich horns, and bass. Chance – as he always does – gets candid about his personal and professional status. He touches on the birth of his new daughter, his beloved hometown, and his continued eschewing of the major label machine. The man born Chancelor Bennett has always been willing to peel back the curtains for his listeners, and “Angel” is no exception.

I actually got to meet Chance at this year’s Pitchfork Music Festival and can say that his earnest, genuine persona is no facade.

Listen to Angels (both live and the studio version) below and let us know what you think.

Tags: Angels, chance the rapper, Chicago, Rap, saba
← Is it Yeezy Season yet?
You Need More Saxophone in Your Life →