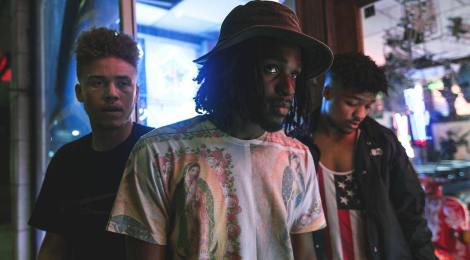 Hurt Everybody is not only one of the best rap groups to come out of Chicago, but they’re also close friends of ours at Pretty Good Music. They played our Festivus Maximus show in December, and we sat down with the trio of Carl, Supa Bwe and Mulatto Beats for an interview last year.

2K47, their newest mixtape, just dropped on July 4th and it is an absolute powerhouse. Hurt makes some of the most passionate and sonically diverse hip-hop coming out right now, so it’s only fitting that their project is filled to the brim with different styles and sounds, along with a who’s who of high profile Chicago artists including Mick Jenkins, Twista, Saba and Alex Wiley.

Particular highlights include the Twin Peaks collaboration “Before the War,” and the raucous “YUNO,” which features local MC Logan.

Though the project is filled with guests, it remains firmly rooted in Hurt’s sound thanks to their excellent chemistry and the mic presence of Supa and Carl. Carl might be the more lyrical rapper, but Supa has personality to spare and the duo combine for some inspiring work.

The instrumentals – which all three members switch off handling – are minimal without being sparse, featuring striking drum tracks and squealing synths that fit flawlessly with their wide range of flows and occasional sing-song hooks.

It has been a banner year for Chicago hip-hop, but you’d be hard pressed to find a more cohesive and enjoyable project than 2K47.