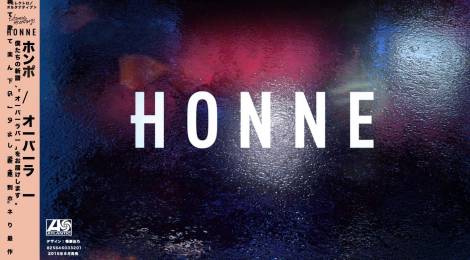 HONNE – Loves The Jobs You Hate

In Japanese, Honne (本音) is the word to describe a person’s true feelings and desires.  In British English, HONNE is an up and coming, London-based duo made up of Andy & James.  Their music can be described as many things: electronic, pop, alternative, soul, etc.  As one of my favorite bands in 2015, they first caught my attention with their debut song “Warm On A Cold Night”.

Their new track, “Loves The Jobs You Hate”, displays the funkiness that I first heard in their music.  A snare-filled background beat is overlaid with plenty of synth and jazzy bass, while Andy is telling a former lover that he’s done with them.  Andy’s powerful, yet calming vocals blend well with the infectious beat, as they tend to do with most of the group’s music.  The addictively good song is off their upcoming EP, Over Lover.  Unfortunately, I have one gripe with HONNE, and it’s the fact that they haven’t dropped an album yet.  I think I can be patient though as their discography has been a pleasure to hear so far.

Give “Loves The Jobs You Hate” (and HONNE’s other songs) a listen and let us know what you think below: