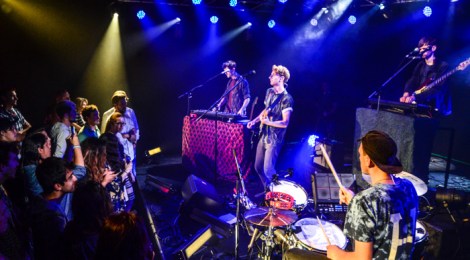 JBTV has been a fixture in the Chicago music scene for over 30 years now and it doesn’t really show signs of burning out any time soon. Huge names like Jeff Buckley and Smashing Pumpkins got their start here and waiting in the lobby, which is decked out like a long lost MTV show, I’m overwhelmed by all the memorabilia; from a signed gold record certification for Radiohead’s the Bends to an Afghan Whigs poster, these bands run the gamut. I attended my first taping a month or two ago when Twin Peaks absolutely crushed the modest room that JBTV is housed in. It felt like an important moment with a band on the cusp of blowing up and that same vibe emanated from Glass Animals when they stopped by the studios a couple weeks ago. It’s something that JBTV excels at capturing: the energy and excitement of a young band making it. For many, its the first time they’ve ever been on TV as is the case with Glass Animals.

They brought their album, Zaba, to life with an array of synthesizers and sample pads triggering ambient sounds and exotic percussion. Besides a few interjections of “Cheers” after a couple songs, the band remained relatively silent and the focus was obviously their music. Low-key is the name of the game and a 7 minute version of “Gooey” had the band stripping their sound down to some of its most basic elements where a break in the percussion had a smooth, slightly filtered guitar lick driving the song. It was beautiful, hypnotic, and a compelling example of Glass Animals growing prowess as a live act.