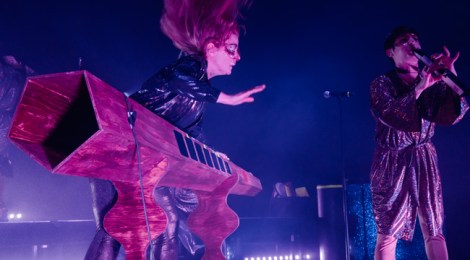 The Knife, the reclusive, enigmatic Swedish brother-and-sister combo, have been on tour in support of 2013’s excellent “Shaking The Habitual” throughout the year. The shows have been some of the most unique, overwhelming live musical experiences in recent memory, featuring a cavalcade of dancers, bizarre instrumentation, and one giddy opening pump-up speaker. Naturally, the bulk of the setlist has come from their latest album, but the group has mixed in tracks from their earlier discography. In that vein, the group has released “Shaken-Up Versions,” which reworks eight tracks between 2001’s “The Knife” and 2006’s “Silent Shout” that they’ve performed this year.

The reworkings do wonders to the tracks, which is particularly impressive given that the original versions were arguably some of the most innovative, unrivaled electronic music of the 21st century. While these versions aren’t recorded in a live context, it’s clear that these re-recordings have been designed to keep an audience on their feet.

It appears that the duo are aware of the changes in electronic and house music since their debut, incorporating sounds borrowed from newer acts in remaking their original material. Both “Got 2 Let U” and “Silent Shout” utilize Disclosure’s trademark intro drum beat (see “Voices,” “Defeated No More”) to give the new versions a heightened propulsive energy perfect for a live setting. While that may sound like the Knife have sold out their idiosyncratic brand of off-kilter, minor-key sound in favor of a more club-friendly aesthetic, the opposite is actually the case. Songs like “Without You My Life Would Be Boring” demonstrate that the group can make a track that’s simultaneously creepy and catchy, making you move your feet while still acknowledging the almost unnerving instrumentation building the song.

While this will probably be seen as a minor release in the group’s discography, given the lack of new material involved, it shouldn’t be missed. It’s a perfect souvenir for those who got to see these tracks performed live, or an easy way to live vicariously for those who missed out. Either way, stream the album below via Spotify.

← Young Fathers on Kimmel
Black Milk – “What It’s Worth” →