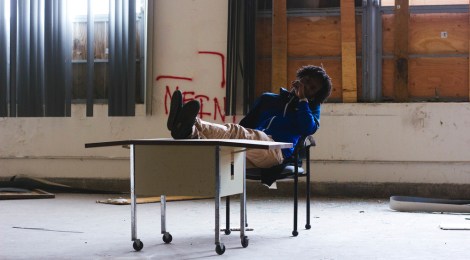 Saba’s ComfortZone was a gem in a pretty ho-hum year for rap music. The production was top-notch and the Chicago MC demonstrated a lyrical knack leagues ahead of his peers in addition to an ability to tackle a wide range of difficult topics with intelligence, maturity, and poise.

While he’s been popping up on guest verses and the occasional work behind the boards, “Temporary” feels like his triumphant return to the game. The track features everything we’ve come to love about the Pivot Gang MC, as well as a stellar hook and guest verse from fellow Windy City spitter Tink.

The track is thought-provoking and showcases Saba’s lyricism and his ability to switch flows practically every line.

Just as ComfortZone addressed the adversity of Saba’s upbringing and Chicago’s systemic issues, “Temporary” deals with the fleetingness of life and what comes with that realization.

CHAD’s instrumental is dramatic, but not cheesy. It oscillates between churning strings, soft acoustic guitar, and hard-hitting piano chords as the two rappers showcase why they are considered the future of hip-hop by many who are familiar with their music.

Listen to “Temporary” below, and stay connected with us for more Saba updates: