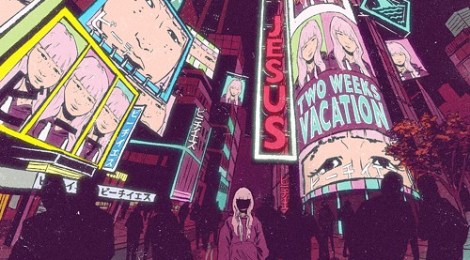 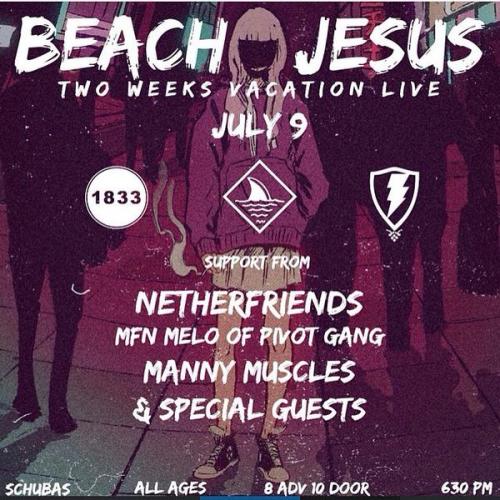 We love Chicago hip-hop as much as anyone here at PGM, and there is one hell of a show coming this Thursday that we feel the need to tell you about.

Beach Jesus, a rising quarter comprised of producers JAROFMY and SEER along with multi-faceted vocalists Jessiath and Chandler London, are headlining at Schuba’s, one of Chicago’s most enjoyable venues.

Though new to the scene, Beach Jesus are already making a serious splash with a unique sound that is part Kids These Days and part vaporwave.

They just released their first album Two Weeks Vacation (above), and its a whirlwind of energy, passion and a slew of different influences. Their high energy sound is sure to translate into a memorable live show, and you’ll want to see these guys in an intimate setting before they’re performing at Lincoln Hall or The Riviera.

Also on the bill is longtime PGM favorite MFN Melo, a Pivot Gang member who has provided us with heaters like “AntiSocial,” and “TSA” over the past year. His latest track, the Saba-produced “Get Up” (below) features some of his cleverest lyricism and a hypnotic beat.

Also on the ticket are Manny Muscles, Netherfriends, and plenty more. Plus, if there’s one thing we’ve learned from Chicago hip-hop shows, it’s that you never know who might wind up spitting a few bars on stage.

Doors open at 6:30PM and we’ll certainly be in attendance. We don’t know why you wouldn’t be?