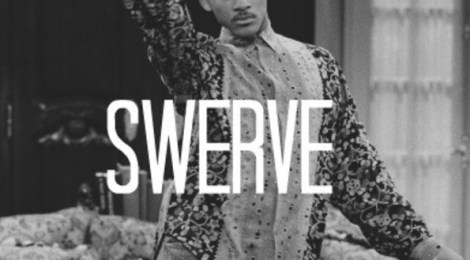 The Complicated History of the Word “Swerve”

I will always be fascinated by the way in which the general public can take a new colloquial term and overuse it until it has lost all value. Words that once had meaning like ratchet, and swag were kidnapped by the masses and exhausted until the very use of those words made you cringe in repulsion. People will use a word like ratchet (which originally was used to describe a classless woman) to label any situation that seems moderately shady. I don’t know where this new definition came from, but it seems like the same metamorphosis is befalling the word “swerve.”

If you consult your neighborhood urbanite, or search urban dictionary, you will find that the slang term is used to imply dodging somebody. For example, if there’s a girl pretending she missed you all summer break, but didn’t even hit you up once during those three months then that’s when you can tell her to swerve. That’s simple enough to understand, and even the lamest elderly grandmother could get that. However, just last week, I was mistakenly perusing an “article” on Buzzfeed about several words teenagers’ use and their true meanings. Among other inaccurate blunders, the website claimed that swerve was “used as an exclamatory word to emphasize a statement,” but when does Buzzfeed get anything right? Opinions aside, I’ve realized that swerve has reached its peak, and due to its popularity, it now means nothing. So for when you pass by the local high school and hear hoards of prepubescent kids yelling “SWERVE, SWERVE,” I jotted down the history of the word, so you can know what it’s been through. Here’s the latest:

Overnight Atlanta sensation, iLoveMakonnen, has been hustling hard and staying very relevant after he was blessed with a co-sign from Drake. “Swerve” is his second single, and its popularity can be partially attributed to his collaboration with producer “Mike Will Made It.” While he has been successful so far with the song, Makonnen cannot take credit for introducing the term to the mainstream. The real culprit is Big Sean and his continued use of it on the summer of 2012 smash “Mercy.”

In an interview with Complex Magazine after the summer banger dropped, Big Sean was questioned about where the famous ad-lib came from. In response he said:

“I just feel like that’s what I’m doing. I’m swerving around. Especially in the D-Town with whips everywhere in the city. That’s something my crew was saying a long time ago. I guess it’s something I brought to the forefront to where everybody can hear it. That’s what it’s all about, making new stuff up, making this elevated.”

Well said, Big Sean. He does have a point about his crew saying it though. If you now take it back to 2011 and listen to “My Closet” featuring his long time friend SayItAintTone, you can catch the word nonchalantly rapped at the 4-minute mark.

This leaves us at a standstill. SayItAintTone couldn’t possibly be the inventor of swerve and Detroit couldn’t be where it was birthed. We would’ve heard more examples from the area if that were the case. Big Sean’s crew was special. They were influenced by someone to say it. To make an educated guess, their knowledge of the word as a colloquial term can be credited to the soundtrack of the 2005 movie, “Hustle and Flow.” More specifically, one of the more popular songs, track 2 by Lil Boosie and Webbie:

Both rappers that claim residence in Baton Rogue, Louisiana, the two grew up using the term frequently together. Pouncing on the opportunity to gain some attention off of it, the song was included on the same soundtrack where Three 6 Mafia won an Oscar for another track called “It’s Hard out here for a Pimp.”

The Dirty South has always been known to keep cool cultural terms and traditions to themselves until someone rips it out from under them. Swerve was more so a product of Houston, Texas and its car culture where it was used interchangeably with the word “Swang.” In more of a literal sense, swerve was used to describe the way in which Houston SLABS would slowly weave through different lanes. It was appropriately called “Swangin” or occasionally referred to as the “Houston Swerve.” Check out this example:

And this classic song by Houston rapper, Z-Ro:

The word swerve proved to be the evolution of swangin’, and it wasn’t until Lil Boosie and Webbie rapped about it in more of a figurative sense that it started to take off as a colloquial term among music lovers. So Let this serve as an unofficial eulogy for swerve. A testament to how long the word lived, and how far it traveled to eventually reach national fame. From Baton Rogue, Louisiana, to a group of rappers in Detroit, to the world at large. We salute you, swerve. Shoutout to all the words that didn’t catch on as well as you did.