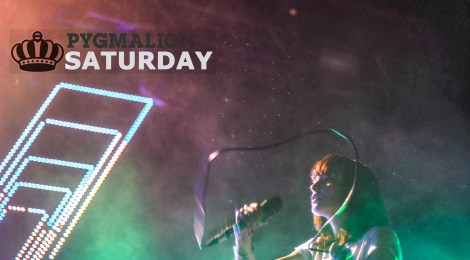 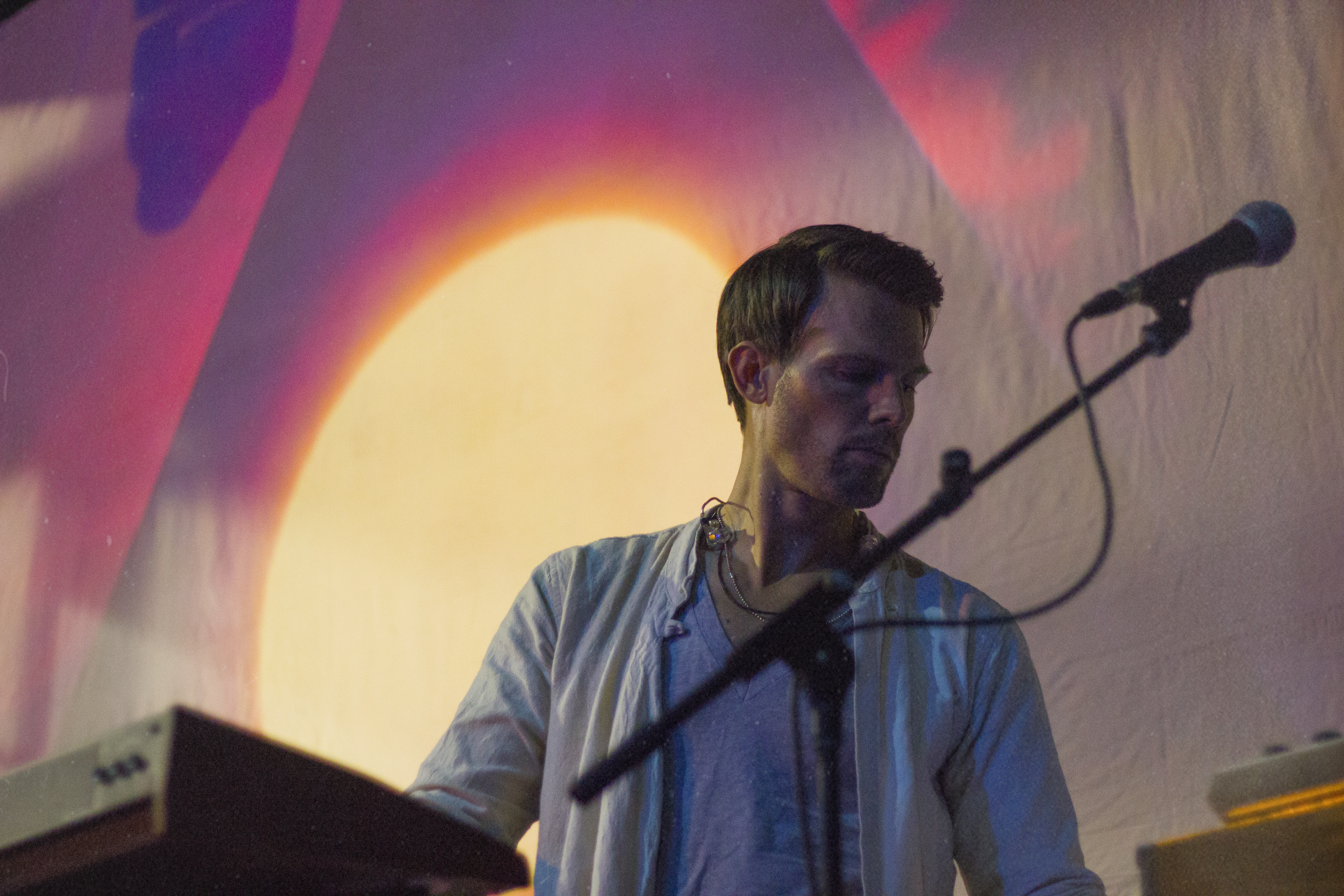 Scott Hansen, one of the acts who played Saturday night at the fest, goes by a few names. For his musical endeavors he is Tycho, though he produces his photography and design work under the name ISO50. This makes sense given that Tycho’s show relied heavily on the incorporation of videos featuring triangles, rolling clouds, and canyons that all looked as though they could be stock footage for an instructional yoga video. Tycho’s sound is easy listening ambient pop, with edges so filed down that it doesn’t really make an impression. And the incorporation of footage from Alejandro Jodorowsky’s anti-capitalist film, “The Holy Mountain,” only served to emphasize Tycho’s packaged aesthetic. In between some of the more energetic acts, Tycho’s set felt like visual and sonic filler. 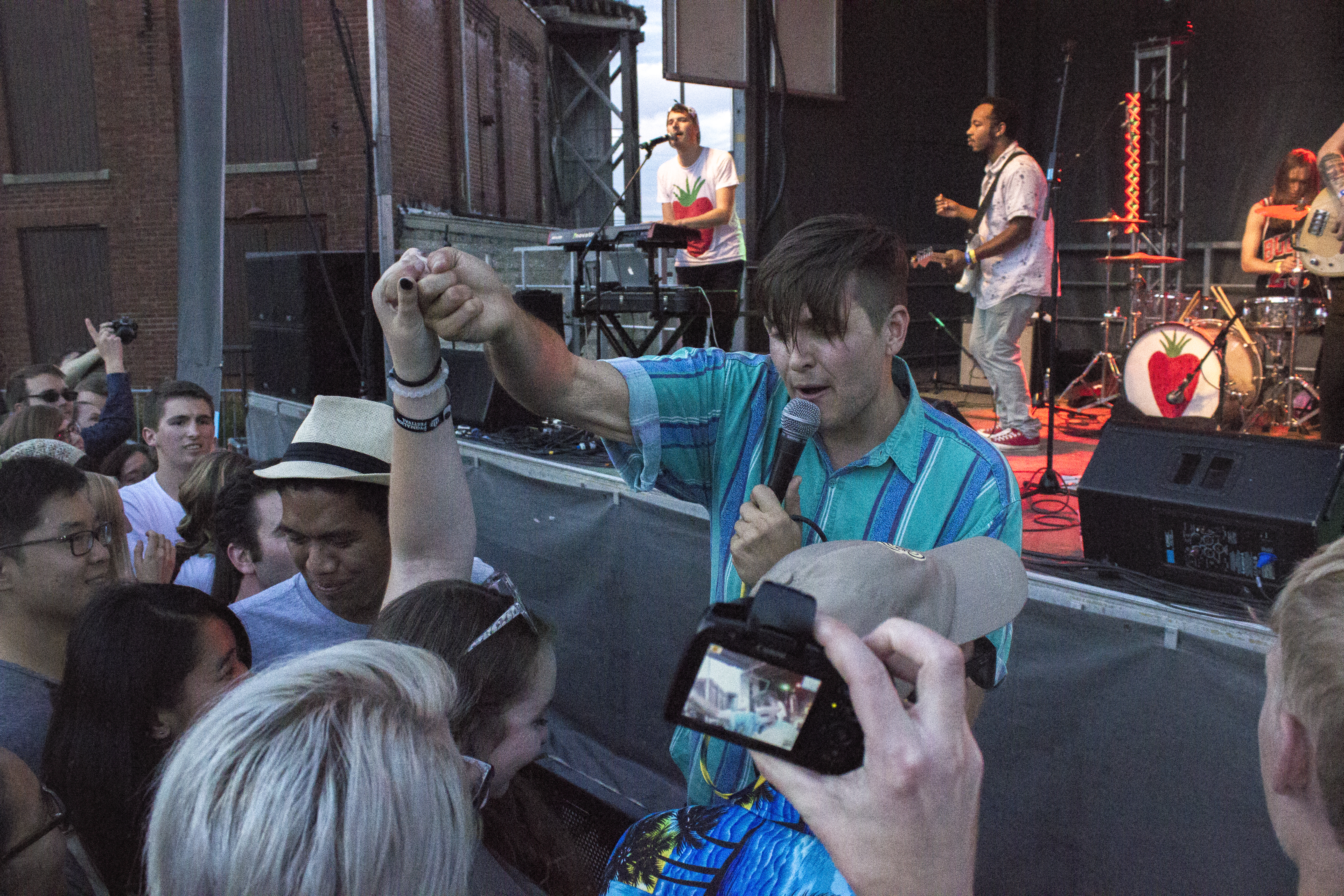 Brooklyn indie pop five-piece Miniature Tigers took the stage Saturday evening. They delivered a crowd pleasing performance full goodwill and synthy hooks. Their brand of pop was sweet, even delving into funkier territory on songs like closer, “Sex on the Regular.” Like their music, their performance was lighthearted as front man Charlie Brand joked with the audience and shared a kiss with keyboardist Rick Schaier. It came as no surprise to learn that the band opened for Fun on their Some Nights tour, as anyone who enjoys pastel sounds and strawberry aesthetics will be happy to listen to both bands. 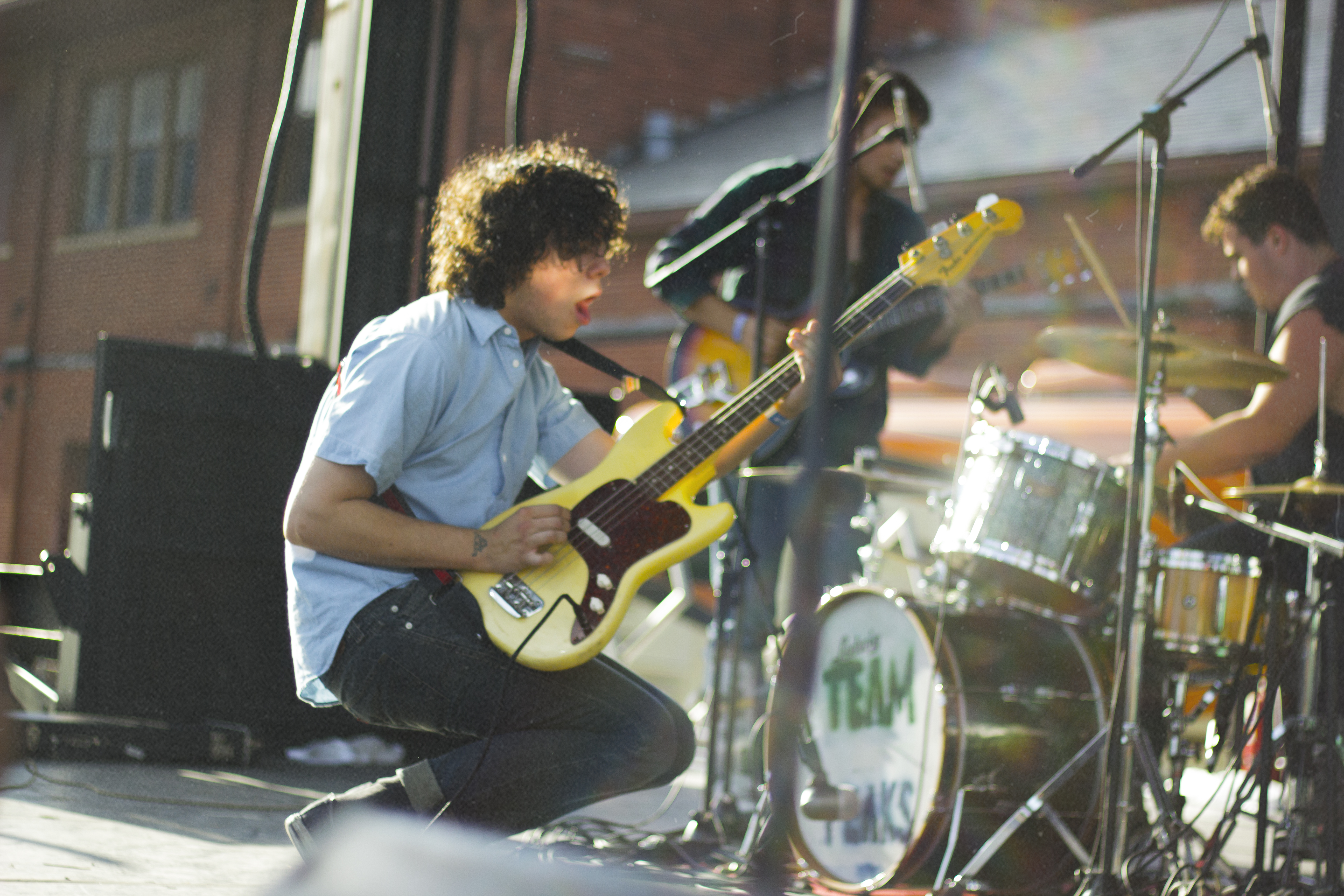 Chicago’s Twin Peaks have had a pretty amazing couple of months. With the release of their second album Wild Onions, they’ve received pretty unanimous praise for their particular take on Big Star and Replacements-esque Power Pop. I was lucky enough to catch them a couple times over the summer, but they never had the chance to play more than 30-40 minutes of music at a time. With the slightly longer Pygmalion set they dug a bit deeper into their catalogue and played more tracks from their debut LP Sunken. The highlight of the whole set was Sunken’s “Natural Villain,” a slow burning boogie reminiscent of T. Rex’s “Lean Woman Blues.” Of course songs like “Boomers” and “Flavor” got the crowd in the mood for mosh and there was never a lull in their performance with all three frontmen switching off vocals and delivering on-point harmonies. The band’s genuine, passionate delivery is always fun to experience and “Natural Villain’s” repeated refrain of “stop trying so hard” plays into their ethos; it’s not earth shattering, but 4 dudes playing rock music was the perfect counterpoint to an electronic-heavy day. 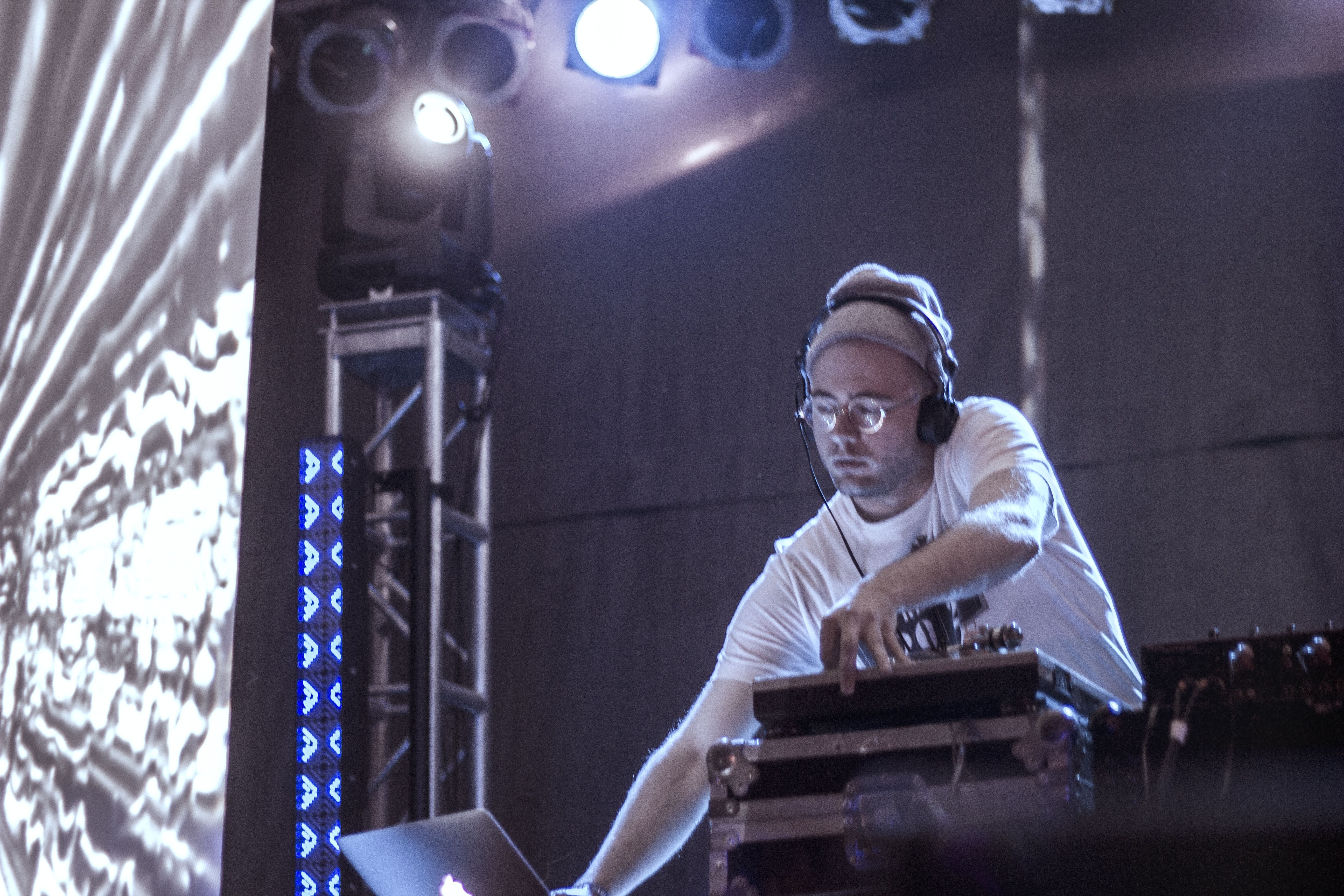 Providence based producer, DJ, and Chrvches tour mate The Range played an extremely energetic set full of his signature touchstones: Warm, Ambient RnB sampling songs over Grime, Footwork, and Jungle beats. About halfway through his show, he dropped “Loftmane” and built it up until into morphed into a distorted Jungle Drum n Bass break. The crowd went absolutely nuts and he cracked a huge grin. This was generally a trend he followed for the whole performance – pedaling melodic, memorable vocal samples and huge beat drops in equal doses. It was an incredibly tight DJ set that whipped the audience into some crazed dance frenzies, none more energetic than when a remix of How To Dress Well’s “Words I Don’t Remember” broke through a hazy murk of bass tones. 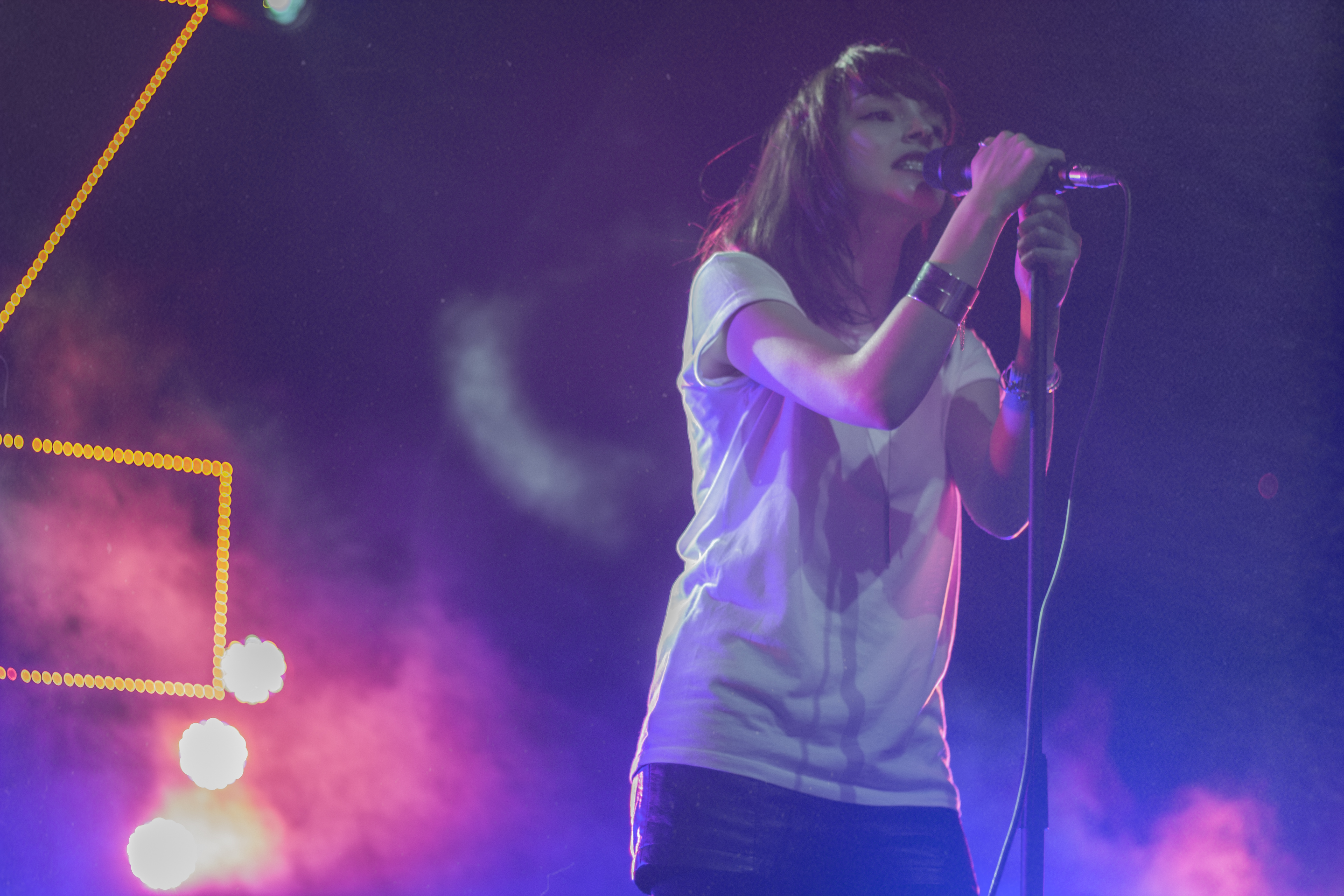 Pygmalion might be the biggest little festival in the country and one of its many perks is seeing a giant name like Chvrches on a small, intimate stage. Lauren Mayberry’s easy going stage banter grounded their otherwise arena ready blend of Depeche Mode and Cocteau Twins. Either they played a shorter set than expected or their slick, sugary songs made time feel like it was passing quicker than it was. One of the best moments of the day was Lain Cook, the utilitarian bass, guitar, synth wielding member of Chvrches, completely ripping the bass riff on “Lungs” – it might’ve been the heaviest moment of their whole set. The Martin Doherty led “Under the Tide” also switched things up enough to keep the crowd on its toes. Never a dull moment from the Glasgow based band! They exited the stage and made their way to the Hi-Dive for a DJ set filled with Katy Perry.