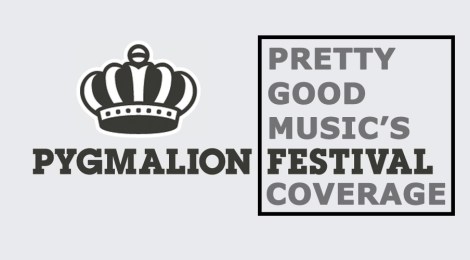 The music of Sun Kil Moon, the moniker of front man Mark Kozelec, feels immediately familiar. He fits comfortably in the pantheon of gruff, enigmatic, singer-songwriters and he does have much in common with them:  straightforward delivery, a rough exterior, but a penchant for sensitive subjects like phone calls with his mom. What really separates Sun Kil Moon from other acoustic guitar-heavy musicians is the strange and slightly off-putting combination of his immensely direct lyrics- which feel like a conversation with a friend- and his more experimental classical guitar-influenced musicality. His words are stories told plain and simple, but his flamenco style instrumentation expands the insular world of his songs and transforms them into vaster and more engaging imaginative spaces.

From the opener, “Dogs,” to “Caroline,” from his collaboration with The Album Leaf, watching Sun Kil Moon felt like living with him for an hour. Unlike his recordings, which are intentionally full of echoes and air that make everything Kozelec sings seem like it happened years ago, watching him on stage was like he just came home, sat down in a beaten recliner, and started telling you about his friends. This is incredibly humanizing.  By the closer “Ceiling Gazing,” which he playfully offered to let the audience chose from two options, I felt in tune with his sound and with him. This was in part because he followed the tradition of many folk rock musicians that I love, but more so because he did it with worldliness and believability.

In many ways, being in a space with Sun Kil Moon seemed like a true exercise in empathy– he shares so much of his life and the lives of others through his songs. But like any roommate- even if they’re only that for an hour- I did find some of Kozelec’s remarks grating. One of the historical pitfalls of the misanthropic singer-songwriter genre is a tendency to treat women without the consideration that someone like Kozelec gives his own feelings. And sometimes his words felt, like his music, generous and heartfelt. But Kozelec’s attempts at stage banter also included remarking on all the “Asian girls with violins” on campus, asking one woman to take more of her clothes off, and telling another that he “loved her legs so fucking much”. And these remarks- hastily made and inconsiderate of his audience- were the things that occasionally held me back from engaging with his set in the way I wanted. 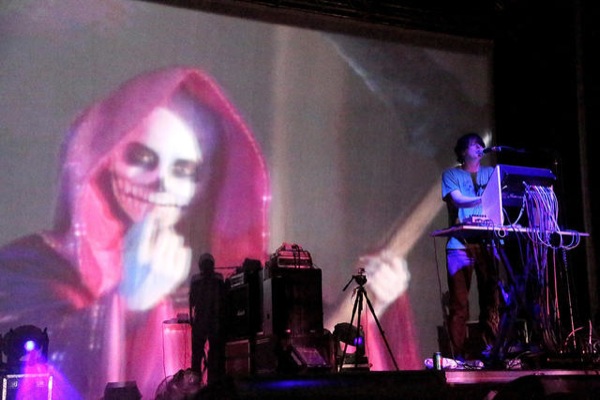 The big name on Friday night was Panda Bear. Unlike Sun Kil Moon, who minutes earlier had shrunk the giant space of Krannert Center for the Performing Arts through an intimate, hushed set, Panda Bear made the space feel massive, alien, and disorienting. He was hidden behind samplers, effects pedals, and some kind of modular synth making it quite clear he was not the focus of the performance. A massive projection alternated between trippy, disorienting i-Tunes visualizers, glitched out collages of gummy worms and lips, and the reoccurring motif of women in skeleton makeup – an obvious nod to his forthcoming Panda Bear Meets The Grim Reaper. The visuals were quintessentially Animal Collective harkening back to the busy, overpowering visual style of Centipede Hz and ODDSAC. The strobe lights aided some of the busier, funkier tracks which Panda debuted, but generally detracted from the more mediative numbers where my attempts to focus on the music were thwarted by a barrage of blinding white light. At this point in Panda’s career the visuals seemed a little played out, feeling more like a habit than a necessity.

The music, however, was stunning. I’ve long been team Avey due to some intrinsic need to support the underdog, but every cut debuted from the new album proved Lennox’s genius and was instantly absorbing; equal parts beautiful and chaotic, but always rhythmic and groove oriented. The second song from the set combined break beats and thick, grimy bass while Panda floated over the top with one of the most interesting, unexpected vocal lines I’ve heard this year. I think the key word for his whole set was “unexpected” because Lennox took elements that he’s used before like the somewhat kitschy disney soundtrack instrumentation of a song like “Graze” or the airy Folk of ODDSAC’s “Screens” or the trip-hop inclinations of “Slow Motion” and warped them into completely new iterations of his style. It was a success in the live setting because it gave the audience enough to latch onto while easing them into a new direction. If the album plays as solidly as his live set did, it’s another masterpiece in a long line of boundary-pushing solo releases.

Honestly, if I tried to describe any more of the unreleased tracks this would devolve into word vomit as I grasped at the few discernible moments  of Lennox’s dense sound collages, but I kept returning to a musical moment in Luc Besson’s The Fifth Element to make sense of the sound. I don’t know if it was the vaguely sci-fi lean of the visuals or the crazy vocal acrobatics or just the overwhelming nature of the performance, but I needed to look outside of music in order to qualify my feelings towards what I’d just seen and that’s a pretty rare feeling to come out of a show with.

Check around 3:30 to cop my sleep-deprived logic: