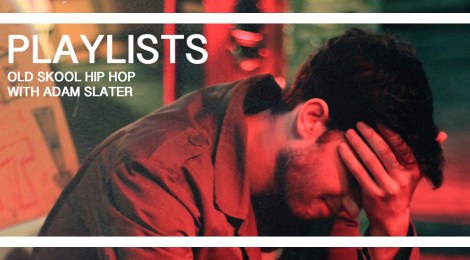 Adam Slater is one half of Appomattox Traphouse. His laid back, old skool flow is a perfect compliment to bandmate Gideon Resnick’s intense delivery. During the recording of their most recent album, Potluck, we talked about Adam’s relationship with early hip-hop and he graciously volunteered this playlist:

This list of ten hip-hop throwbacks are by no means the essential list of classic hip hop tunes, it is just an assemblage of great tracks from artists whose importance in hip-hop is often understated. We all know what Biggie, 2pac, and Jay mean to hip-hop, but these guys are legends that are equal in their own right. And thus I present the list… Kurtis Blow is the OG hip-hop star. He was the first rapper to be signed by a major label, the first rapper to go on a major tour, and the first rapper to have a gold record. Thanks to this cultural figure, artists such as Run DMC and golden-age MCs had an inspirational individual to listen to and further develop the hip-hop culture. You can thank this man for establishing hip-hop as a national phenomenon. You can also thank him for this sensational funkadelic track. 2. Brand Nubian – Brand Nubian
If you’ve never heard of Lord Jamar, Sadat X, or Grand Puba, it’s time to familiarize yourself. These men, who fronted Brand Nubian, were one of the first alternative hip-hop groups along with De La Soul. Their debut album, which this track is found, is both critically acclaimed and groundbreaking in subject matter. Tackling afrocentric and islamic themes of the five-percenter nation, Brand Nubian effortlessly weaved such topics into smooth rhymes and flavorful instrumentals. Their style was impeccable as well, check the album cover for One For All if you don’t believe me. These guys made discussing socio-political issues cool. Hip-hop’s west coast staple Too $hort is too large a figure to ignore. As the first west coast hip-hop artist, Too $hort helped establish a lot of the g-funk sounds that are associated with west coast gangster rap. This track in particular demonstrates both how incredible g-funk was, and how dope it was to talk about your sexual pursuits, which Too $hort does with expertise. 4. Kool G Rap – It’s a Shame
If I had the chance, I’d talk to you for hours about the importance of Kool G Rap. He helped discover Nas, his lyrical style and image was jacked by both Biggie and Jay-Z, and he has arguably the greatest flow in all of hip-hop history. With excellent breath control, innovative multi-syllabic rhymes, and his mafioso rap themes, he might be one of the most enjoyable artists to listen to for any aspiring MC. Often referred to as “your favorite rapper’s favorite rapper,” Kool G’s influence can’t be overstated. Enjoy his lyrical prowess on this track. You want to get a crowd up? Play this shit. Nobody has been more of an outspoken advocate for hip-hop culture than KRS has been. Starting his career in the 80s with the group Boogie Down Productions, KRS went on to be an underground hip-hop hero, calling out the imitators in tracks like this and clearly stating the cultural importance of hip-hop. Thanks to him, the UN recognizes hip-hop as a religion, which KRS has written the bible for! (Don’t believe me? Check Amazon.com) Furthermore, he may be the greatest live MC ever. You’d have to be crazy to try to battle this guy with a microphone. 6. O.C. – Time’s Up
O.C. is and underground hip-hop legend, but not in the same vein as KRS. Far more under the radar, O.C. was a well-respected MC responsible with one of the most overlooked hip-hop albums of the 90s. “Word…Life” has some of the realest themes and tracks you can hear in the genre, headlined by the ultimate call-out track, “Time’s Up.” If you get a chance, listen to this whole album. 7. Organized Konfusion – Stress
Genius lyricism and delivery. That’s the only way you can describe Pharoahe Monch, who exists as half of Organized Konfusion with Prince Poetry. One of the most well-respected artists in hip-hop, Monch has one of the most easily identifiable voices in hip-hop. With impeccable vocal deliveries featuring menacing inflections and mind-flipping flows, Monch can be considered one of the greatest MCs of all time. Enjoy this raw track and listen to a few others if you get the chance, you won’t regret it.

8. Big Pun – Twinz
R.I.P Big Pun. The man was 400 pounds at the time of his death, which is shocking to know considering his impressive breath control demonstrated on a track like this. His flow was also one of the greatest of all time (inspired by Kool G Rap of course, who Big Pun knelt down for and kissed the ring when they had first met) If you don’t believe that Big Pun is one of the greatest of all time, then try this line out, “Dead in the middle of Little italy, Little did we know that we riddled some middlemen who didn’t do diddly.” Damn. And the other dude on this track? Fat Joe. Turns out he’s got skills. 9. The Pharcyde – Runnin’
One of the greatest indie rap pack crews to achieve commercial success, The Pharcyde followed an unconventional approach to hip-hop. With albums like “Bizarre Ride II,” The Pharcyde established themselves as an alternative and silly rap group that could tackle real issues without sounding contrived, and did so flawlessly. It’s all good when you listen to the Pharcyde, Los Angeles’ premier hip-hop 90s hipsters.
10. Big L – Put It On
R.I.P. Big L. This legend is one of hip-hops most creative lyricist. He could insult you in an endless number of ways and use that same ability to elevate himself to places other MCs have never been. Hands down considered an all-time great, Big L deserves multiple listens because his unique flow has never been matched by anyone else.